Ride The Bus OR Fuck The Bus Drinking Game 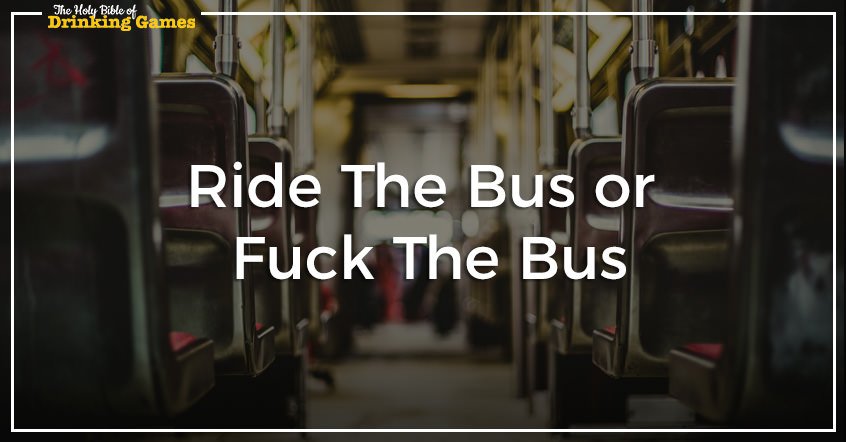 Ride The Bus OR Fuck The Bus Drinking Game was submitted by The God of Games.

OVERVIEW of Ride The Bus OR Fuck The Bus Drinking Game:

A game that can lead to a lot of drinking if you manage to get a good hand of cards.

If you like the game Pyramid and are finding it too easy then this is the game for you. The God of Games has taken things to a new level and introduced even more ways that could have you drinking. He enjoys watching mortals suffer from hangovers the next day.

Take the time to read the rules below and pray you’re not the one with the hangover the next day.

The aim of this game is to hope that the 4 cards you have are within the give rows of the pyramid and not the take (image below to explain).

To get the 4 cards you must first guess the colour of the card, then whether it’s higher or lower than the first card, then whether the next card it going to in-between or outside the previous two and then finally the suit. You go around the table doing one card at a time.

Once everyone has 4 cards you lay out the pyramid.

Then turn one card over at a time within the pyramid starting off at the “take 1” row and then make you way up the rows.

Hopefully, you have the card that is in the give 6 row and then you can dish out some punishment!

When you give drinks you can either split them between people or give all drinks to one person. It all depends if there is someone that doesn’t appear drunk enough or you think needs payback for getting you in a previous game.

The only difference is… when you’re at the pyramid all the rows are giving rows. In this version of the game, you have to give the cards to the person you want to make drink.

The cards can be played more than once. For example, if you were given the 4 of hearts on row 2 and another 4 appears later on, you can give that 4 of hearts to someone else.

At the end of the pyramid, whoever has the most cards has to Ride The Bus.

The whole deck is turned upside down and the person riding the bus must guess the colour of the cards as they are being turned over. Players must guess 5 correct IN A ROW. If they get it wrong, they drink and have to try again to get 5 correct guesses in a row.