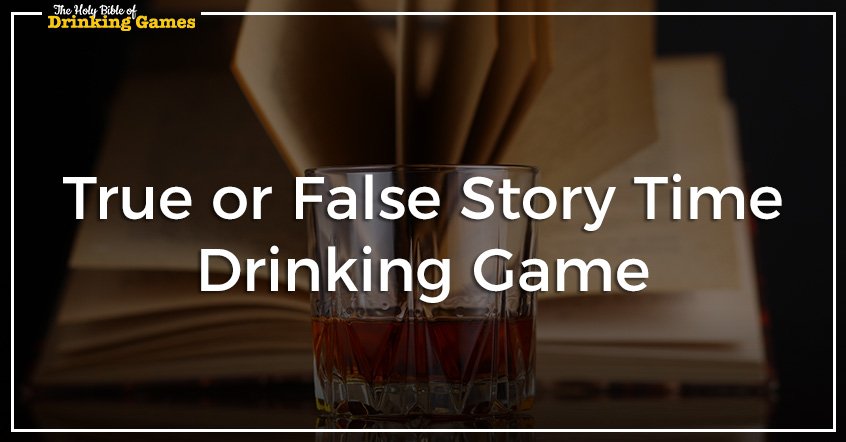 True or False Story Time drinking game was submitted by the God of Games.

Overview of the True or False Story Time Drinking Game:

An excellent game to play with people you’ve never met before! This game revolves around telling a story based off of a noun that’s been written down on paper and people guessing if you’ve told a true story… Or lied your ass off! Better brush up on your storytelling skills if you’re going to be lying in this game.

Everyone writes down various nouns on pieces of paper. These can be places, objects, people (generic people, e.g. mother, father, a small child, a crazy person, etc.) etc.

When it’s your turn, you’ll select a piece of paper, not letting anyone else see what you’ve drawn. You then need to roll a dice or flip a coin. If you’re using dice, rolling an even number means you tell a true story about what’s on the paper. Roll an odd number you tell a lie. If you’re using a coin, heads is a truth and tails is a lie.

For example: if the paper had “toilet” written on it you’d proceed to tell the story of that insane night out that led you to spend the majority of the following morning with your head in the toilet, praying to Jesus for forgiveness.

Everyone listens to your story and guesses if it’s the truth or a lie. They’re not allowed to ask you questions.

If they’re wrong, they drink. If they’re right, you drink one gulp for each person who guesses correctly.

This could go very badly if there’s a decent sized group and you’re a bad liar.