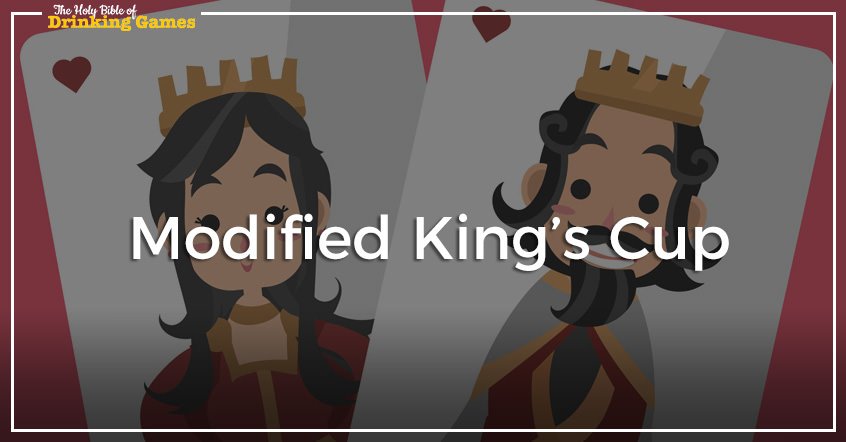 Modified Kings Cup Drinking Game was submitted by The God of Games.

This game very similar Traditional Kings Cup except a few of the cards have changed. You might want to check out the Ring of Fire game too if you like this one.

With an empty cup in the middle of the table, you spread a deck of cards upside down around the glass in a big circle. One at a time people start to draw cards from the circle. Be careful not to break the circle otherwise you get a punishment drink!

Each card has a specific thing to do. Once the player who’s drawn the card has done the task, it moves onto the next player to draw a card.

When a King appears you pour your drink into the empty “King’s Cup” in the centre. You want to fill the cup up a 1/4 of the way, so pick the size of the glass wisely 😉 Although if it’s not a pint glass you will feel the God of Hard Liquors’ wrath!

When the 4th King has been drawn you will have the King’s Cup will be full. The player who drew the 4th card has to now skull the cup. Cheering and laughing are encouraged!

After the cup has been drunk, it’s time to play a new game!

Enjoy this version of King’s Cup!

WHAT CARD IS WHAT?

WHAT DO THE CARDS MEAN?

Lick the card and stick it to your forehead. You cannot touch it once it’s there. For the duration the card is on your forehead or until the next Ace is drawn, you can add, modify rules and do whatever you want, you are God!

You can make one player take one drink.

You have to take one drink.

Everyone touches the floor, the last player to do so drinks.

All guys must take one drink.

All girls must drink.

Everyone must put his or her hand up. The last player to raise their hand must take one drink.

The player who drew the card must pick a mate. Whenever one player has to drink, so does the other. So whenever either person drinks, so must the other player. You are best mates!

Add a rule to the game. All rules stack on top of each other.

Similar to thumb master, except it can be any move the chief wants. The chief tells the group what the move is and can do it as many times as they want until the next Jack is drawn.